It seems the Johnson County budget for FY 20 has become a topic of a blog that judges me in my wife's words as "blasting" and "inaccurate." I haven't read that blog in years, so I couldn't tell you personally. In developing the budget, the Board of Supervisors received very little input from the public and even less media. After we voted, a member of the media contacted me wanting to question me about my no vote, but I didn't want controversy so I didn't return the call. But now since a Sup with a blog wants to tell people what I did or didn't do, I guess I should say it in my own words.

Building a County budget takes dozens of meetings, thousands of lines of data and many points of decision. Because of the timing of becoming a Supervisor, I now have had a hand in eleven budgets. All of these meetings and everything I have said or voted on is recorded. I have been consistent in advocating for funding for roads and bridges; social services and poverty programs; mental health and disability services; jail alternatives; sustainability and trails; emergency medical services; infrastructure and maintenance; quality customer service. I support government services, a good infrastructure and good government. But I also am consistently the lowest spender on the Board.

I believe I have always underspent my colleagues in each and every budget.

The final budget had a number of things I didn't support, like a CIT building in the floodplain that is significantly higher than originally considered and two years later than it should have been opened. The budget also has the Board increasing their own personal staff from 3 to 7 FTE in three years. The budget has significant pay raises for elected officials and a special bonus and an unplanned raise for the Sheriff. You will hear this budget lowers the levy, which is absolutely true. But for a number of years homeowners have been getting an increasingly larger share of tax askings because Iowa code favors commercial and agricultural lands. So a steady or even lowered levy can still raise taxes and this one does just that. I believe it is best to tell that and not spin it. Johnson County could have easily created a budget that did significant good and not raise homeowners taxes, but I was outvoted in developing the final budget.

Things like this happen every year and for nine years I argued my point of view, I negotiated and I lost a lot of small votes, but I voted for the budget. I believe compromise is something local government does that is superior to state and national government. I would have done that last and this year, but for one thing that my conscience wouldn't let me do.   My personal ethics would not let me vote for a budget that used Conservation Bond money on what is called the Schwab property, that has some woodlands that I support, but also an event center, barns, collections, which I could not support.

In 2008, I, along with dozens of people, Dick Schwab, and my spouse campaigned on the conservation bond initiative -- Our Land Water and Future. We convinced just over 60% of voters in a recession to raise their taxes and vote for conservation and sustainability. I co-chaired that campaign with Schwab. We promised the voters the money would only be spent for conservation in woodlands, wetlands, prairies and trails. We said it couldn't be spent in any other way. We told you there would be complete transparency. As it turns out, you were misled and I am ashamed and embarrassed that your money is being spent this way. It is wrong that the County took money that is much needed for climate change conservation and flood protection in wetlands and diverted it to fancy barns, collections and an event center. It is wrong that a campaign co-chair cashed out for millions on conservation money. This project is already costing more and more money for staffing, equipment, trucks, utilities and more. There is no doubt the barns are beautiful. But more woodlands, wetlands and prairies is what you were promised. Diverting much needed conservation money to a money pit event center is wrong,  it is also on a rock road, off overused chip seal roads in a residential area. This is the absolute worst place in the County for an event center.

I wasn't going to do media interviews or write my thoughts, but the blog by a Supervisor personally and misleadingly attacking me needed answered. 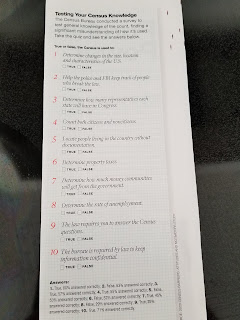 Posted by Janellerettig at 3:04 PM 2 comments:

For the upcoming Johnson County budget for FY20, the Johnson County Sheriff proposed raising taxes to put a Deputy in the Clear Creek Amana high school. I opposed this move to put police in schools, because statistically it escalates juvenile engagement with the criminal justice system and furthermore disproportionately impacts children of color. Fortunately, the other Supervisors opposed it also. When the Sheriff cornered me to challenge my opinion, he said that may be true nationally but where is the Iowa data? The Clear Creek Amana Principal and Sheriff still want armed police in the school on a daily basis. Not a single person spoke out about this proposal. The Sheriff has asked for time to discuss this initiative of his further.

Thanks to ACLU and the Des Moines Register for providing this important data in the editorial. I believe having police in school often escalates juvenile involvement with the criminal justice system. This is the wrong direction to go in addressing children's mental health and behavioral issues. Let's put social workers, councillors and doctors in schools and resist putting people there with the power to arrest.

I hope people will engage and weigh in on this issue in this year's school board races and next year's campaign for Sheriff.